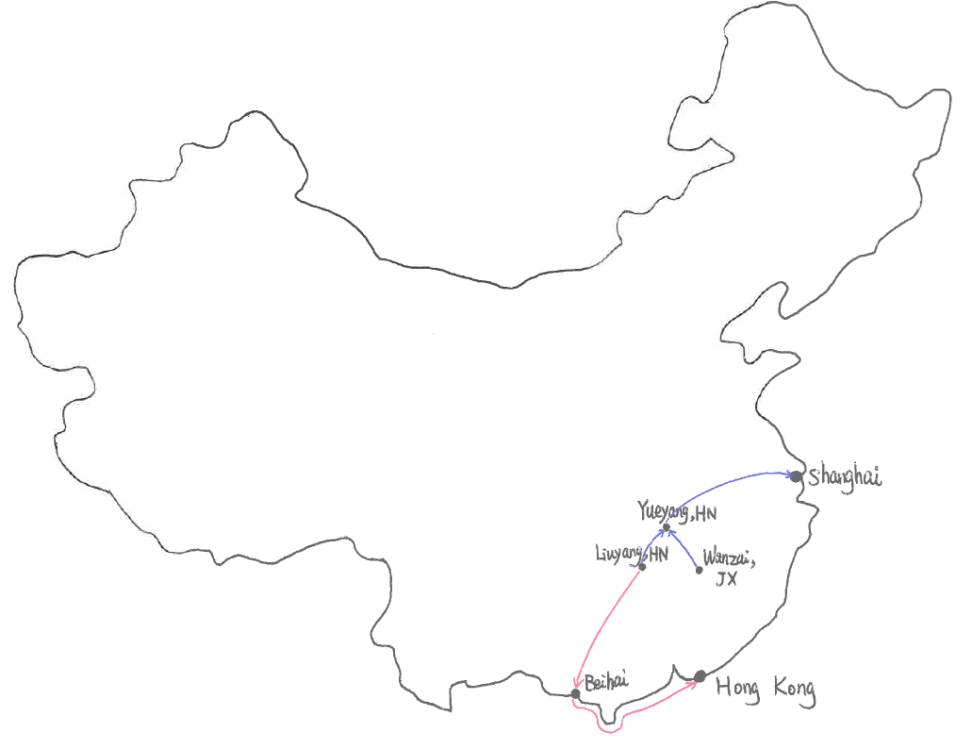 #
Fireworks are mainly coming from Liuyang, Hunan province (HN for short) and Jiangxi province (JX for short). Wanzai is one of the main cities which produces fireworks in Jiangxi province. Fireworks can be shipped through two ports, Shanghai or Hong Kong. See the below map.

Blue route: fireworks are loaded, under the inspection of CIQ at the shipping agent’s warehouse, in Liuyang HN or Jiangxi in the container, which will be transported by trailer to Yueyang port. Thereafter the container will be brought to Shanghai port by barge (small vessel) through waterway, the Yangtze River. The container will be then put on the big vessel and ship to other countries.

#
The blue route via Yueyang/Shanghai can handle much more fireworks containers than red route via Beihai/Hong Kong. If we compare the blue route and red route, you will find these facts:

Red route: Beihai is a small port. The number of small vessels are limited. Beihai can only handle around 6.000 containers each year. The transportation from Beihai to Hong Kong is by sea so it is very often affected by typhoon which will delay the shipment. What’s more, the shipping companies deliver the most big vessels in Hong Kong port to ship the non-dangerous goods not fireworks. So there is only one shipment in every twee weeks.

How the current problem happened?

#
In the past, CIQ is the department who is responsible for inspection and supervision during loading. If the packing lists conform with the goods during loading then the container can be released and transported to Yueyang, then to Shanghai. Products from Jiangxi can be transported to Liuyang for combining loading, or the other way around.

#
Since beginning of this year, CIQ is combined with China Customs. China Customs want to make changes. In March, Liuyang Customs did not allow any products from Jiangxi province to be combined with products from Liuyang. Jiangxi products can be only loaded in Jiangxi because Liuyang Customs don’t want to get any risk from products produced by other provinces. After two weeks, Yueyang port made also announcement that they also don’t allow any goods from Jiangxi to pass there unless the Jiangxi government and Jiangxi Customs can provide for each product the original inspection certificates and a stamped declaration. But Jiangxi government and Customs think this is too strict and too much paper work to do. They were not agree. In the meantime, Yueyang Customs started to check the Yueyang port yard, as they never checked before. During the inspection they found that the Yueyang port yard is too old and doesn’t conform to the related regulations. Yueyang Customs made an announcement to Yueyang port (see below picture) that they have to rebuild the yard and make sure that the port yard conform to the regulations within 2 months. After this announcement, the whole fireworks loading and shipping is stopped because Yueyang government and Hunan government can’t invest so much money at this moment.

# Since the stop of blue route through Yueyang/Shanghai, everyone switches to the red route through Beihai/Hong Kong. In the beginning of April there were still many fireworks containers for US market (around 30%) which have to be shipped. In the meantime, because all the European importers also want to have the goods earlier in there warehouse, this conflict to get enough space starts to escalate. The influence is huge:

#
The Liuyang government was talking to Changsha (capital city of Hunan province) government and Changsha Customs to see if the procedures can be resumed like before. But Changsha Customs doesn’t make any concession. Two days ago Liuyang government send delegation to Beijing to talk this issue. The current solution is: from May 1st and May 20th , all fireworks containers can be loaded and transported like before through Yueyang, no matter it is product from Liuyang or Jiangxi.

#
How the situation or solution will be after May 20th, it is a still a question mark because the renovation of the Yueyang port yard is the biggest obstacle in this big picture.

What does this mean for Lesli and our customers?

#
In the beginning of this year we established direct long-term contract with the biggest fireworks shipping agent in China so that we have priority in getting containers for shipment through Shanghai or Beihai. Even though the ocean freight is increased a lot and very difficult to get space, we have got reasonable number of containers till now.

#
The suppliers of Lesli is giving us maximum support. They are renting more warehouses at this moment to store as many fireworks as possible and keep production going as much as possible.

#
At this moment we already needed to spend much more extra money in order to receive at least a reasonable number of containers in the coming period.

Depending on the situation after May 20th we are maybe forced to charge an extra fee for this year’s orders to our customers. At this moment we cannot predict how the situation is developing, but we are following it day by day.

We hope you, as our valued customer, can give us understanding and support. We will keep you informed if there is any update!